The much-anticipated recent announcement of Elon Musk’s development of a brain-computer interface (BCI) device, called Neuralink, was a media sensation.  The fact that Musk, a successful businessman who makes advanced technology a commercial reality, is investing in BCI is significant and newsworthy.  This area of research has been around since the 1970s, and brain stimulation through implanted electrodes dates to the 1920s, but until recently BCI technology was a specialized pursuit outside the mainstream.

Musk’s money and industry are welcome to advance this area of research.  But it is important to separate accomplishments from ambitions; to compare this device alongside other BCI methods, and most importantly, to comprehend the magnitude of the problem of “melding mind and machine.”

According to Musk, the biggest advance of Neuralink is the “order of magnitude increase in bandwidth” that their slender, flexible electrodes, which are like strands of hair, can provide over the 128-electrode Utah array that is widely used in research and human BCI devices.  But limited bandwidth is not the biggest hurdle the BCI field is facing.  Furthermore, the computational and analytical problem of interpreting neuronal firing and precisely manipulating even small networks of neurons is astounding.

Musk claims that Neuralink can vastly increase the bandwidth over existing BCI devices by inserting up to 3,072 electrodes into the brain using 96 implanted threads that have multiple contacts on them.  Moreover, the system will be capable of both reading and writing information into and out of the brain, to create a “symbiotic” relationship between the human brain and computer.

This is achieved by stitching the thread-like electrodes into the brain with a sewing machine-like device, as illustrated by a dramatically lit video of the machine poking the threads into fluorescent green Jell-O (geletan).  This multichannel electrode is a significant contribution to the field, and so is the development of a miniaturized, multichannel chip that can be implanted in the body to operate the electrodes.  But the engineering obstacles are less daunting than the biological obstacles. 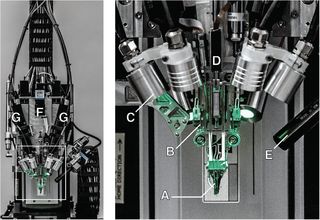 To implant a thought or drive neurons in a circuit appropriately by computer is not as simple as it might seem.  If the situation of driving a neuron with electrical stimulation is simplified to two states, “firing” or “not firing”—which is a major simplification of how neurons operate—tapping into only 300 neurons would yield two raised to the power of 300 possible states in that network.  That is…

That number is not only larger than the U.S. national debt, it is greater than the number of all the atoms in the known universe (2 X 1080)!  Now imagine that 3,076 microelectrodes are used.  The number of states in that still relatively small network is… well… out of this universe: 5.8 X 10924 possible states.

This calculation greatly simplifies the real situation in neural networks, however.  The frequency and pattern of neural impulse firing are important in conveying and computing information.  Calculating how many different ways only 80 neurons in a circuit could fire in an ordered sequence yields a number of possible firing orders that exceeds the number of atoms in the universe—with only 80 neurons.  That probability is calculated as 80 factorial, which equals 8.3 X 10 81 possibilities.

Another Neuralink advance highlighted in Musk’s announcement is in using an automated machine to insert the electrodes precisely.  But how would you know what neurons to stimulate in order to implant a thought or “download” other information?  How would you find the right ones among the tens of billions of neurons in the brain?  Moreover, everyone’s brain is a bit different, so a particular neuron in my brain would not necessarily do the same thing as a neuron at the same location in yours.

What’s more, once you have plugged your electrodes into neurons, what pattern of electrical stimulation are you going to deliver to “download” information into it?  Conversely, how will you make sense of all the neuronal chatter you pick up using the implant to “read” information out of the brain?

The fact is that neuroscientists do not know enough about how information is coded in the brain by the pattern and rate of neural impulse firing to decipher the information zipping through neural networks.  Most BCI devices work by sensing some change in ongoing neural activity that the operator can influence to trigger an operation by the computer.

Musk’s team is to be congratulated, but let’s be clear: This announcement was a publicity event, not the consequence of a scientific publication on this research.  Or as Musk characterized it, a recruitment effort to attract talent to the new company.  The announcement was based on two white papers that were published in bioRxiv, which are reports written by the scientists and posted online, not peer-reviewed studies.

The results achieved thus far are promising and sure to advance, but they are far from the lofty ambition of creating a symbiosis of the human brain with a computer’s artificial intelligence.  The research is at a very preliminary stage.

Let’s examine what achievements are reported in these papers, since Musk’s visionary ambitions have been widely covered in the press.  The reported studies in the first paper were performed on four rats.  Twelve to twenty-four electrodes were implanted into each animal. The number of these electrodes in each rat’s brain that successfully detected neuronal firing was 2, 3, 7 and 16 electrodes in each of the four animals.  That’s a rather high failure rate and a small number of test animals, but these are only the first attempts with this new technology.

The second paper, published the day of the publicity event, included recordings of electrical activity in one rat from 1,020 points on 40 of the 44 threads inserted into the brain, which provide 1,280 electrode contact points with brain tissue.  About half of these contacts recorded electrical activity.  (Not all the electrodes would be expected to fall within close enough proximity to a neuron to pick up its electrical impulses.)  Implantation was performed on 19 rats, but only one example recording was provided.  The study does not indicate how long the electrodes were in place when this recording was made.

In both white papers, no attempt was made to utilize the neuronal firing for the purposes of BCI.  No attempt to implant anything like a thought or sensation was reported; in fact, no attempts to stimulate neurons through the Neuralink electrodes were reported.

The title of the paper claims that the method is “minimally invasive,” and the ambition Musk described is that the sewing-machine insertion of threaded electrodes will make tapping into the brain’s electrical activity as easy as Lasik eye surgery.  But stitching these electrodes into a mouse’s brain at the present time requires opening the skull to expose the brain.  Any method that involves brain surgery is invasive and carries risks.

A major problem with BCI is that piercing brain tissue with electrodes causes damage and scarring, and the electrodes eventually degrade inside living tissue and become useless.  The thin-film polymer composition of these microscopically slender electrodes (about 1/10th the thickness of a human hair), is designed to provide longer-term recording than current electrodes, and to produce less tissue damage.

Based on the data presented, however, it is unclear how these very thin polymer electrodes will stand up over time, because the reported experiments were short-term tests in a small number of animals.  Recordings were made from one rat implanted with the wispy electrodes for 60 days, and the implants fell off prematurely in the other three rats studied.

Microscopic analysis of the brain tissue showed evidence of cell death and scarring, as will occur with all types of brain implants.  This examination was made two weeks after implanting the electrodes in one animal and 10 weeks after implantation in another.  By comparison, the Utah array, which also causes scarring, has a reported longevity of six to nine years when implanted into a primate brain.

New advances in BCI are published regularly in peer-reviewed scientific journals, but they may not arouse the attention of the general public.  The achievements of others working in the BCI field have helped people cope with paralysis, amputation, and diseases like locked-in syndrome.  Several of these BCI approaches do not require drilling holes through the skull and sticking electrodes into the brain.  Optical and magnetic methods are being developed, in addition to improvements in EEG recording of brain activity through the scalp.

One clever example of a non-invasive method of BCI is the “stentrode” device used by Thomas Oxley and colleagues.  In this approach, electrodes are threaded into the brain through the bloodstream, in the same way a vascular shunt is inserted by cardiac surgeons and neurologists who slip a cannula into a vein or artery to open a blood clot.

That technique carries little risk, and research using this method of detecting neural activity has been published in peer-reviewed journals.  Long-term studies using the stentrode have been extended into large animals (sheep), a much better model of the human brain than the rat brain.

That technique is undergoing human clinical trials, a considerable achievement considering the highly justified restrictions on human experimentation. It can take years of preclinical research before approval to test the procedure for safety and efficacy in humans is granted.  Musk states that he hopes to begin clinical trials with Neuralink in 2020, which is a challenging goal.

Some other exciting approaches for BCI are interfacing with the brain through nerves in the arms—to control prosthetic devices and deliver the sensation of touch to an amputee from a robotic hand—or by detecting electricity generated by minute muscle twitches in the arm as the device by CTRL-labs does.

Neurons can be stimulated non-invasively by delivering pulsed magnetic fields through the skull (TMS), by applying DC or AC current into the brain through electrodes on the scalp, and by beaming ultrasound into neural tissue.  None of these currently have the microscopic precision that an implanted electrode has to stimulate a single neuron, but they do influence neural circuit function, and they don’t require surgery.

“Sell the sizzle, not the steak,” is the tried-and-true approach to marketing.   There is tremendous potential for BCI to benefit people with brain dysfunctions and for use as an experimental approach to understand how the brain operates, but to tout BCI as a consumer product that will provide a third “digital superintelligence layer” to the brain is unnecessary hyperbole.  Do you want electrodes stitched into your brain, considering the pain, risks, and expense of the surgery, just to dispense with your $20 computer keyboard?  Most people cringe at the prospect of having stitches to close a wound.  If your keyboard fails, a new one can be delivered on your porch the next day.

BCI technology is exciting and it has great potential, especially for controlling prosthetic devices.  The Neuralink team provides an industrial power boost to this field of research.  My purpose is not to criticize, but rather to clearly state the facts.  Just as the Wright Brother’s first flight was only 59 seconds, the initial achievements reported in the white papers are only a start.

Also, research and development at commercial enterprises are typically not disclosed until the necessary patents have been secured.  It is likely that Musk’s company has achieved more than what is revealed in these white papers.  The data available, though, deserve as much attention as the dreams.

Beyond all the tech talk, excitement, glitz, and engineering with silicon and thin-film polymers, I hope that considering the realities involved in this quest deepens appreciation for and awe at what the human brain accomplishes with its network of tens of billions of living cells—communicating with spurts of chemicals and blips of bioelectricity to enable flesh to think.