A new study finds that conception of time may influence whether someone quits. 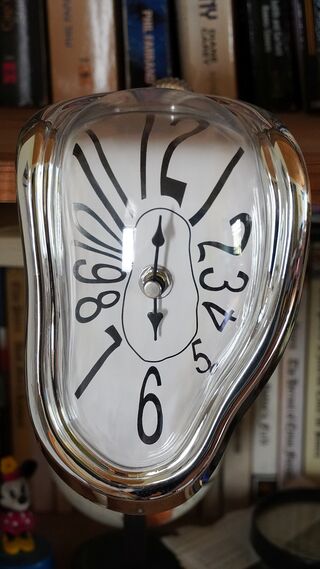 The Great Resignation continues at record rates, with 4.3 million employees in the U.S. quitting their jobs in January of 2022, according to the latest figures just released from the Bureau of Labor Statistics. Ramifications of the COVID pandemic, low pay, poor opportunities, hostile workplace, bad bosses, and better opportunities elsewhere are driving many people to consider quitting their jobs. Some carry through on their intentions, but others do not. A new study by a team of psychologists at Hiroshima University in Japan and the University of Warwick in the UK reveals a surprising factor in whether or not a person will carry out their intention to quit their job: how the person thinks about time.

How We Think About Time

Time is a continuous arrow, but our concept of it splits into past, present, and future. By nature, some people tend to dwell on the past. Others live in the moment, and dreamers live with an eye on the future. Which one are you? The answer may help predict whether you will or will not act on your thoughts of quitting your job.

Psychological tests can assess a person’s tendency to live life thinking of the future, the past, or existing in the moment by having them rate their agreement with a series of statements, such as “I focus on what is currently happening in my life” or “I think about what my future has to offer,” etc. In the present study, the researchers set out to determine if how a person thinks about time might influence them to quit their jobs or stay. The results, just published in the journal Applied Psychology online in advance of print, give clues to the answer.

How Time Conceptions Could Persuade Someone to Quit

It may be that people who ruminate about the past will constantly dredge up past injustices, hold grudges longer, thumb their nose, and waltz off the job thinking (or saying), “You can take this job and shove it!”

On the other hand, carefree souls who live in the moment tend to be more impulsive and are greater risk-takers. Quitting a job requires accepting an unknown risk, after all. Maybe those happy-go-lucky types are more likely to flit off without a second thought. “See ya!”

And then there are the planners; the folks who are always looking ahead, angling, scheming, striving for better: “Gotta go. My future calls!”

Only one is the correct answer—at least, according to the results of this new study. In this study, the researchers surveyed 683 full-time employees from a wide spectrum of industries and used a psychological test to score each person on which of the three modes of thinking about time they tended to have. They also determined several other demographic and psychological factors to control for other variables and to look for overlap among these factors.

Six months later, they surveyed the same group of people again and asked if they were contemplating quitting their jobs within the year. Finally, they came back to the group six months later to find out how many had actually quit their jobs.

The data clearly suggest that how a person thinks about time tracks with whether or not a person will quit. The researchers found that there was no relation between carrying out the intention to quit and being a person who tends to live in the present. Being carefree and living in the moment, it seems, tends to boost happiness and job satisfaction. Similarly, people in the study who tended to think about the future were less likely than others to carry out their thoughts of quitting.

But those who tended to think in the past were much more inclined to carry out their intention to quit. This finding held firm even after accounting for many different demographic factors (gender, marital status, age, education level, and others) and psychologic factors (including levels of conscientiousness and other personality attributes).

Previous studies have found that people who focus on the present tend to have a more positive interpretation of their experiences and higher levels of well-being and life satisfaction. That satisfaction and positive outlook could explain why they are less likely to leave their job.

People who tend to think of the future, imagining, and planning their personal and professional life course, have likely already thought ahead in accepting their current employment, and so they may be less likely to abandon their life plan and quit. Other research shows that such people are less likely to exhibit risky behavior, and they tend to be more conscientious.

Those who tend to look to the past constantly relive past experiences—including negative ones—and refresh those bad memories long after others would have let bygones be bygones. These people will likely keep bringing up the grievances that motivated them to think of quitting and become fixated on that course of action. Other studies show that such people tend to interpret situations more negatively. It is human nature for negative experiences to have a more powerful influence on behavior than positive ones.

This study has practical value for employees and employers, but I think it may also illuminate what’s driving the tidal wave of resignations that has swelled during the COVID pandemic. I wonder how the shock of the sudden worldwide infection with this deadly virus, and all the misery it caused, may have influenced how people think about time. Possibly, being forced to stop work and assess their lives, more people are looking back. After all, for many employees, COVID removed the present, in terms of employment, and made the future uncertain. All those folks who were suspended from work had to contemplate about their jobs was the past. That rearview mirror perspective on work would have increased their tendency to pull the plug.

“Watching the clock” is the iconic characterization of work for pay. Now we know that an employee’s way of thinking about time is a strong factor in whether or not they will call it quits.