On Monday, Neuroscientists at Boston University published a new approach to improve memory in elderly people. “This is an entirely different approach,” Robert Reinhart, who led the study, said in a press conference announcing the findings. The method uses specific frequencies of weak electrical current applied to the scalp at appropriate spots to target brain circuits responsible for short-term or long-term memory. Twenty minutes of this stimulation on four consecutive days boosted both short-term and long-term memory ability in research participants aged 65 to 88, and the benefit lasted for at least one month after the experimental treatment. The method provides “an entirely new realm of potential new treatment options [for Alzheimer’s disease and other memory disorders],” Reinhart said.

Loss of memory is a hallmark of cognitive decline in aging, and it is a common complaint. Difficulty remembering people, places, and facts can become a severe disability with life-changing consequences.

Present methods of treating memory impairments in aging rely on drugs like Aricept to boost the strength of synaptic transmission. Synapses are the points of contact between neurons where chemical signals are relayed through neural circuits. Memories are believed to be formed by networks of neural connections that encode our experiences, so strengthening those connections should strengthen memory.

Unfortunately, cognitive enhancing drugs do not always work, and they can cause serious side effects. The method employed by Reinhart’s team, of using electrical brain stimulation, exploits a new perspective on how the brain forms and recalls memories.

The new understanding comes from taking a “helicopter view” of how memories are stored and recalled; that is, how the brain operates as a complex network. A memory requires bringing together information that is perceived and stored in many different parts of the brain to form a coherent scene or concept. For example, recalling the word “Trump” evokes a rich complex of images, sights, sounds, emotions, and context to form a vivid memory quite different from that evoked by recalling the word “Obama.”

Sights, sounds, emotions, and so forth, are processed and stored in different places in the brain, and all of the puzzle pieces that form our complete concept of these words must be brought together to form and recall a specific memory. Scientists have long wondered how this happens, and recently a new possibility has emerged: brainwaves.

While it’s well-known that neurons communicate by exchanging electrical impulses with each other, a surprising new finding is that the buzz of neural activity in brain circuits is typically clustered and transmitted at specific rhythms. When populations of neurons fire electrical impulses, their combined discharges create an electrical field in the tissue surrounding them, and because neuronal firing is rhythmic, the surrounding fields of electricity oscillate at different frequencies. These rhythmic electric fields permeate through brain tissue as brainwaves, which even penetrate the skull, enabling scientists and doctors to detect them with electrodes placed on the scalp (EEG recording). The frequency of neural oscillations ranges from less than one cycle/second in delta brainwaves to 40-100 cycles/second in gamma waves.

Neuroscientists have observed that theta waves (brain oscillations at about 5 cycles/second) strengthen synapses in parts of the brain that are critical for memory, and gamma waves (40-100 cycles/second) oscillate in the prefrontal cortex, where diverse types of information are brought together. Rather than giving a person a drug to improve memory, a better approach might be to use mild rhythmic electrical stimulation to boost the appropriate waves of neural oscillations that couple together all the necessary information for storing and recalling a memory.

A simple and harmless method to alter the power and frequency of neural oscillations in targeted brain regions is to stick an electrode on the scalp, and deliver a weak electrical current at the same frequency as the brainwave of interest. The electrical current is so mild it is barely perceptible as a slight tingle on the scalp. The weak voltage drops dramatically as the electrical current crosses the skull and penetrates brain tissue. By the time the current reaches the neurons, it is too weak to make them fire electrical impulses. However, when delivered rhythmically, in synch with the brain’s neural oscillation, the effect builds, like the combined force mounting rhythmically as people push in synchrony to free a car stuck in mud. 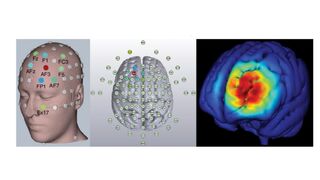 In this study, 150 elderly participants, including many who experienced their memories weakening with age but not suffering from Alzheimer’s or mild cognitive impairment, were fitted with caps studded with electrodes to deliver currents at specific frequencies targeted to brain regions involved in memory. Stimulation was applied as they underwent a memory test. A list of 20 words was read to them and the subjects were then asked to recall as many words from the list as they could remember. This was done five times during 20-minute sessions, while the prefrontal cortex (behind the forehead) and parietal cortex (near the temples) were stimulated at either the gamma or theta wave frequency. The process was repeated each day for four days, and the results showed that memory recall improved incrementally each day the appropriate electrical stimulus frequency was delivered to the appropriate brain region.

The researchers found that when they switched the stimulus to deliver theta wave stimulation to the prefrontal cortex and gamma wave stimulation to the parietal cortex, there was no improvement in memory. This control experiment supports the conclusion that augmenting the appropriate frequency of neural oscillations in appropriate brain regions boosts memory, rather than the tingling scalp heightening attention, which is also known to improve memory.

The data showed that people who had the poorest baseline memory performance showed the greatest improvement in memory. This inspires the researchers to consider “personalized” memory enhancement by measuring brainwaves by EEG or using functional brain imaging to identify specific weaknesses in neural oscillations in a person’s brain before designing the appropriate stimulus for that individual.

Remarkably, the study found that the improvements in memory lasted at least one month after the treatment. This means that the memory boost from the current while information was being remembered and recalled resulted in persistent changes in those neural networks that strengthen memory ability.

In addition to using electrical stimulation, there are many other well-known ways to change brainwaves. For example, lights flashing at gamma frequencies have recently been shown to stimulate the brain’s immune cells (microglia) to engulf the toxic beta-amyloid plaques in Alzheimer’s disease.

In studies on mice, this treatment reverses the cognitive decline caused by the disorder. This approach is now undergoing experimental studies on human patients. In an email interview, Reinhart agreed that rhythmic light or sound stimulation might well be used to enhance memory, as could neurofeedback, which can also change brainwave power and frequency in specific brain regions.

The new approaches to improving cognitive function and memory are a departure from the current use of drugs. As Reinhart wrote, “Electrical stimulation connects with the language of the brain. The brain speaks to itself and communicates with itself through electrical impulses.” By tapping into that electrical dialog and modifying it, brain performance and dysfunction can be modified directly in a drug-free manner.

NOTE:  I would note that the terminology used in memory research can vary.  Some would characterize this as a study of working memory (WM) of different durations rather than short-term (STM) and long-term memory (LTM).  Not only the features, but also the cellular mechanisms differ among the three.  I asked Dr. Reinhart about this and he explained, “We agree that STM and WM do not necessarily refer to the same thing. However, the distinction would be primarily relevant if we were interested in the manipulation of information stored in memory. Since the present experiment was focused on maintenance of information, a concept common to both constructs, we use the terms interchangeably.”  If you are interested in learning more about the differences among working memory and other types of memory (and the controversies involved) my article published in The Neuroscientist may be of interest.

This article was first published in Psychology Today.