“I just laughed out loud,” Sarah said describing the first time doctors stimulated electrodes implanted in her brain. “That was the first time I spontaneously laughed and smiled in five years.”

Major depressive disorder is a serious, life-risking condition that can be difficult to treat. Sarah had suffered severe depression for years, which was not alleviated by any treatment, including shock therapy. “My daily life had become so restricted and impoverished by depression that I felt tortured. Each day I forced myself to resist the suicidal impulses that overtook me several times an hour.”

Neurosurgeon Edward Chang and psychiatrist Katherine Scangos and colleagues at UC San Francisco implanted recording electrodes in Sarah’s brain in an effort to identify faulty neural circuits that were causing her depression and then attempt to treat it by restoring normal electrical activity in those circuits by stimulating electrodes.

Sarah underwent brain surgery so that her doctors could implant electrodes in ten different places in her brain. Over the next ten days, they monitored electrical activity at these spots and attempted to correlate the neuronal firing patterns with Sarah’s self-reported feelings of depression. They noticed that neural oscillations (brainwaves) in the gamma band (30 to 100 Hz) peaked in the amygdala region of her brain at times when her depression symptoms worsened.

The amygdala is part of the brain’s limbic system and it is well established that this region is involved in emotions, mood regulation, and depression symptoms, but “Stimulating there would actually cause more stress and more depression symptoms,” Dr. Chang said in a press conference accompanying their paper in Nature Medicine that was published today.

Instead, they proposed that a peak in gamma power in the amygdala could be a tell-tale indicator of depression beginning to develop. That neural signature might then be used to trigger stimulation elsewhere in her brain that would dampen the gamma oscillations in her amygdala, and, in theory, relieve Sarah’s looming feelings of depression.

Through a trial-and-error process, they found that stimulating an electrode in part of her brain called the ventral striatum suppressed the gamma wave power in her amygdala and relieved her depression. “This joyous feeling just washed over me,” she said describing the sensation caused by the stimulating electrodes.”

Then, Sarah underwent another day-long brain operation to implant a commercially available device in her brain called NeuroPace, which senses the onset of seizure activity in the brains of people with epilepsy and then delivers a brief shock to quell the developing seizure. Such devices are termed “closed-loop” stimulators because they are controlled by the brain’s own activity, not by, say a doctor or the patient.

The rising gamma wave activity in Sarah’s amygdala was not abnormal, seizure activity, however. The team had to reprogram and adapt the device to detect the strength of gamma waves in her amygdala, and when it reached a certain threshold, to stimulate an electrode in her ventral striatum. Surgeons implant the battery-operated matchbox size device inside her skull so there are no obvious indications that her brain is being recorded and stimulated electronically.

The implant has been in her brain for a year and her depression continues to improve, she says. “My lens on the world changed. I’m getting back to myself.” She is able to enjoy life and make decisions such as ordering from a menu, which was impossible when she was incapacitated by severe depression. 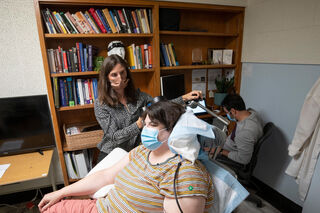 Everything Old is New Again–Are These Findings Robust?

Research to understand and control many psychological disorders by implanting stimulating electrodes in the brain has a long and checkered history. Such studies were actively pursued in the 1950s through 1970s, but they were curtailed because of ethical concerns. Many of the studies were anecdotal and lacked adequate controls.

More recently, deep brain stimulation to treat depression has been used with success experimentally, and non-invasive stimulation by TMS (transcranial magnetic stimulation) has been approved by the FDA for treating depression since 2008. Subsequently, the FDA approved TMS for treating obsessive compulsive disorder and migraine pain. TMS stimulates neurons with an electromagnet positioned over the scalp and does not require brain surgery.

This new study raises a number of issues. Replication and experimental controls are the bedrock of scientific research. An experiment performed on only one test subject does not provide confidence that the findings are robust and can be generalized. This is especially so with complex mood disorders where the symptoms can wax and wane, are measured by subjective self-reports, are influenced by many factors, and sometimes resolve without treatment. It seems doubtful that feasibility of treating depression with a new drug based on a one-person test would carry weight or warrant publication in a reputable journal.

Single-case studies are warranted when the situation is so rare, replication is not feasible. For example, the famous patient HM, who could not form new memories after surgical removal of his hippocampi was a unique case—but according to Dr. Scangos, the team has two more people enrolled in the study and nine more on deck.

Control experiments were not reported that would test whether the positive mood Sarah experienced resulted from electrical stimulation of her ventral striatum that was triggered by sensing high gamma power in her amygdala. For example, the effects of delivering electrical stimulation when the gamma power was not peaking or of stimulating other brain regions during the test phase of the study were not reported. Deep brain stimulation of the ventral striatum, without closed-loop control, has been used previously by other researchers to treat depression.

How the stimulation works to relieve depression is not clear. In addition to having direct lines of communication between them, the amygdala and ventral striatum are highly interconnected with many brain regions. Questioned by reporters, the researchers indicated that there was no clear understanding of how high gamma power in the amygdala might cause depression. They noted that since the brain is a complex network, their recording and stimulating electrodes could be tapping into a broader network. You just don’t stimulate neurons where the electrode is implanted, Dr. Chang noted. Connections between distant brain regions passing by the electrode also get stimulated.

Cause and effect are not proven by the studies reported thus far. The burst of gamma power in her amygdala could arise indirectly or be the result, not the cause of her depression. For example, growing stress from feeling the dreadful symptoms of depression welling up in her mind might well boost neural activity in her amygdala. Stress is what the amygdala does best.

The ventral striatum is a hub of the brain’s reward circuitry, which elevates levels of the neurotransmitter dopamine to give us a sense of success. This circuitry is activated in sexual behavior, gambling, decision making, and drug addiction. Many people with depression self-medicate with cocaine or alcohol, and some drugs used to treat depression work by augmenting dopamine levels in the brain. Dopamine-blocking drugs that are used for treating cocaine addiction to squelch the euphoria dopamine produces could test this possible mechanism for how the stimulation is working.

The rationale for using closed-loop stimulation to treat depression is unclear—especially considering the risks involved with patients needing to undergo two brain surgeries, and the $30,000 cost, when there are other less risky and more affordable approaches. Closed-loop stimulation triggered by monitoring abnormal neural activity in the brain has been used for several decades. This technique is helpful in managing seizures by delivering electrical stimulation just as a seizure begins to develop, to preventing a full-blown epileptic fit before a person is even aware that they are about to have a debilitating seizure.

But the need for this automated closed-loop stimulation to alleviate depression or other mood-altering psychiatric conditions is unclear. By definition, patients are fully aware of depression descending upon them. Indeed, the researchers concluded that elevated gamma power in the amygdala signaled the onset of depression by Sarah’s own self-reports of how she felt throughout the day.

The device tripped 468 times a day (about every 2 minutes) while she was awake, but the researchers limited automatic stimulation of her ventral striatum to 300 times per day. They did not use the device at night so as not to interfere with her sleep. Reliability of this signal is an issue.

The researchers say that gamma wave activity could be induced by many other signals the amygdala monitors and other activities it is engaged in, not only by the descending veil of depression. Rather than having a device stimulate the person’s brain 300 times per day, it could be triggered by the person willfully and only as needed, in much the way pain medications can be self-administered.

The corresponding author. Katherine Scagnos, did not reply to repeated requests to comment on these and other aspects of their study.

Sarah must be commended for courageously entering into this study to advance science and help others. She and her doctors are rewarded by the wonderful life-changing outcome. The approach of treating mental disorders with precision electrical stimulation holds great promise for conditions that cannot be treated by drugs or surgery, or that carry serious risks of side effects, such as memory loss following shock therapy.

But beyond medicine, this approach is transformative. “The hardest part of living with depression is the stigma,” Sarah says. Mental illness is too often regarded as a moral failing that robs a person of self-worth. “This is no different from someone with Parkinson’s,” Sarah says.